How we Bioengineer Yeast to have Improved Traits

At Berkeley Yeast, we bioengineer yeast to have traits that are specifically tailored to the needs of brewers and winemakers. Starting with an already existing commercial strain, we introduce one or more genes to enhance the strain’s fermentation performance, expand its flavor production abilities, or reduce its formation of off-flavors. To illustrate how we accomplish this, we’ll walk through the engineering process we used to create Superbloom, one of our first bioengineered strains. Superbloom is a Chico ale brewing strain that we engineered to produce linalool and geraniol—two terpene molecules that are primary contributors to the aroma of Cascade hops. Beers made with Superbloom have enhanced citrus and floral flavor notes, reminiscent of classic dry hop flavors.

Our goal in creating Superbloom was to engineer a brewing yeast strain that would biosynthesize some of the same flavor molecules that are found in Cascade hops. To accomplish this, our first step was to identify the specific molecules that give Cascade its characteristic citrus and floral aroma notes. While we could have done this work ourselves, it turned out that several prior research studies had already determined what the most important flavor molecules in Cascade are¹. These studies found that Cascade’s flavor is due to a complex blend of many different ester and terpene molecules, but that two terpenes are most important: linalool and geraniol (Figure 1). Alone, linalool imparts green citrus notes, while geraniol imparts sweet floral notes. Given the principal role that linalool and geraniol play in driving Cascade’s classic hoppy flavor, we decided to engineer a new strain of brewing yeast that would biosynthesize both of these terpene molecules.

Figure 1. Linalool and geraniol are the dominant flavor molecules in Cascade hops.

Step 2: Identify genes for biosynthesis of the target flavor molecules

Our next step was to identify how linalool and geraniol are produced by Cascade hop plants. Specifically, we needed to know which genes in Cascade encode the enzymes that are responsible for biosynthesizing linalool and geraniol molecules. Unfortunately, at the time we conducted this work, there was very little genetic information available on hops, and it was not possible to identify these genes in the Cascade hop plant itself. We discovered, however, that Cascade hops are not the only plants that produce linalool and geraniol. In fact, many other edible plants, including lemon, olive, mint, and basil produce substantial quantities of these two terpenes. Since genetic information was available for these other plants, we searched these data to identify linalool and geraniol biosynthesis genes. After combing through DNA sequence databases and testing several promising candidate genes, we discovered two genes that could perform the final steps in linalool and geraniol biosynthesis: Within the DNA of mint we identified a gene encoding a linalool synthase enzyme, and within the DNA of basil we found a gene encoding a geraniol synthase enzyme (Figure 2).

The next step was to determine whether expression of these two plant synthase genes in yeast would allow the yeast to produce linalool and geraniol. To test this, we first attached a promoter sequence onto the DNA coding sequence of each plant synthase gene. Next, we integrated the entire gene (promoter and coding sequence) into one of the chromosomes of a Chico ale yeast strain (Figure 3). Finally, we grew this bioengineered yeast strain in semi-anaerobic conditions that mimic a beer fermentation. After a few days of fermentation, we measured the concentrations of terpenes in the beer-like fermentation, and found that the strain had indeed produced both linalool and geraniol! (Figure 3).

While our initial bioengineered strain was able to produce linalool and geraniol, the concentrations it produced were too low to be impactful in beer. Given this, we set out to further improve this strain by increasing its production of these two terpenes. To accomplish this, we first identified two enzymes in yeast that were already producing the natural precursor molecules to geraniol and linalool. We then sought to optimize the expression levels of the genes encoding these enzymes, as well as the expression levels of the plant linalool and geraniol synthase genes. By optimizing gene expression levels, we hoped to increase production of the terpene-precursor molecules, which in turn would allow for increased production of the terpenes themselves.

Execution of this strategy required substantial work, culminating in the creation of over 50 new iterations of our initial engineered strain². Each of these new strains encoded a different combination of promoter sequences controlling expression of each of the four target genes (Figure 4). We grew each of these new strains in model brewing conditions, then measured the concentrations of linalool and geraniol that each produced. We also measured each strain’s consumption of the fermentable sugars glucose, maltose, and maltotriose, in order to determine whether our engineering process had impacted fermentation performance.

The results from these experiments showed that modifying the expression of the four target genes had indeed led to changes in terpene production. Some strains produced far more linalool and geraniol than our initial engineered strain, and most displayed normal sugar consumption during fermentation (Figure 4). 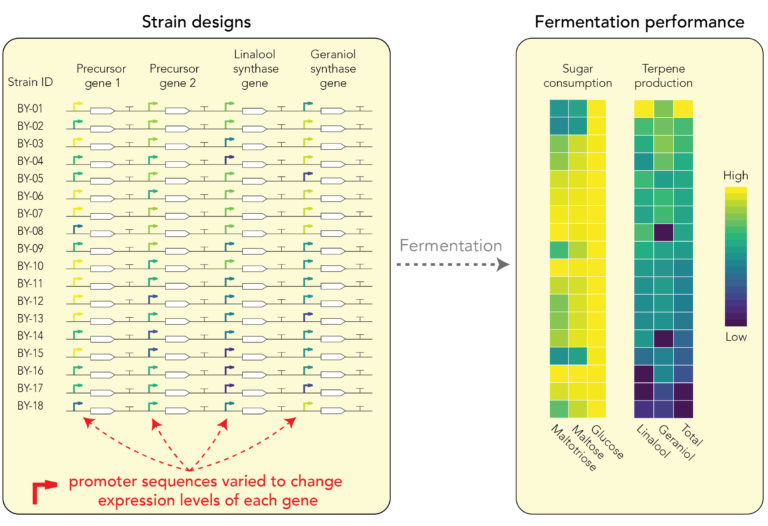 Figure 3. To increase linalool and geraniol production, we constructed and tested a large set of strains in which different promoters were used to control expression of the target genes. A subset of these strains is shown.

After reviewing the fermentation performance of each of our new strains, we identified one strain that appeared most promising for commercial release. This strain produced a high concentration of linalool and geraniol, but otherwise fermented identically to the parental non-engineered Chico strain. To more rigorously assess this promising strain, we used it in a commercial-scale beer fermentation, then measured the concentrations of all relevant flavor molecules in the beer it produced. We also used untargeted metabolomics, a technique that profiles all of the molecules (flavor-related or not) produced by yeast, to confirm that our engineering work hadn’t caused any side effects that would impact off-flavor production or other strain characteristics.

The data from this brewing trial revealed that our improved strain produced linalool and geraniol at concentrations similar to those found in many commercial IPAs (Figure 5), and fermented normally with no off-flavors. Finally, sensory analysis revealed that the beer produced by our strain contained notable flavor notes of rose, lavender, and citrus. We named our new strain Superbloom, and since it was first released, brewers have utilized it to complement hoppy flavors in IPA style beers. To learn more about this strain or to try it yourself, check it out on our available strains page. 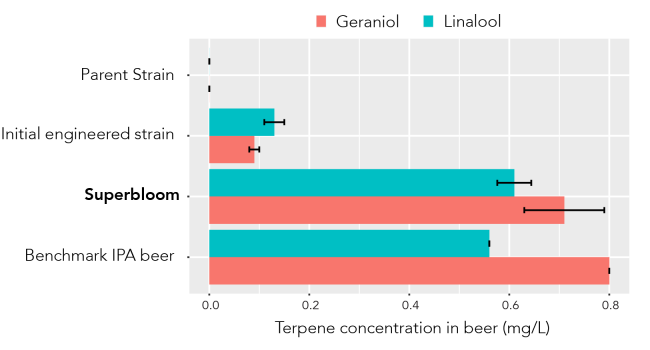 Promoters and Their Impact on Flavor